Today I was informed that it was National Donut Day.  I thought to myself, I will take any excuse to get a doughnut, so let’s make the best of this holiday.

Before I go any further, I want to find the correct spelling of doughnuts.  I see it spelled both donut and doughnut.

says about how to spell this delicious treat.

“Donut is an alternate spelling of doughnut. Some dictionaries point out that donut is rarely used outside the United States. All of them recognize doughnut as the main spelling, as do some of the more popular style guides. Doughnut might be the spelling you should use if you want to be sure you’re not making a mistake.”

In 1917 ladies from the Salvation Army went to France to establish bases near the front lines during WWI. In small huts, they would provide essential goods and sweet treats for the soldiers. These treats were a morale boost to the soldiers.  This is why the soldiers were called doughboys when they came home from fighting in Europe.

How did National Doughnut day begin?  In 1938 the first National Donut Day was celebrated in Chicago, and it continues today in honor of the ladies that gave out the much-needed morale boost to our soldiers.
My uncle was a soldier in WWI.  He fought in France, and toward the end of his life, he shared some horrifying war stories.  He survived the war and went on to live to 102 years old.  I wonder if he ever savored the sweet treat of a donut while serving on the front lines.  I hope he did.
Here is how we celebrated National Donut Day…Pretty Yummy! 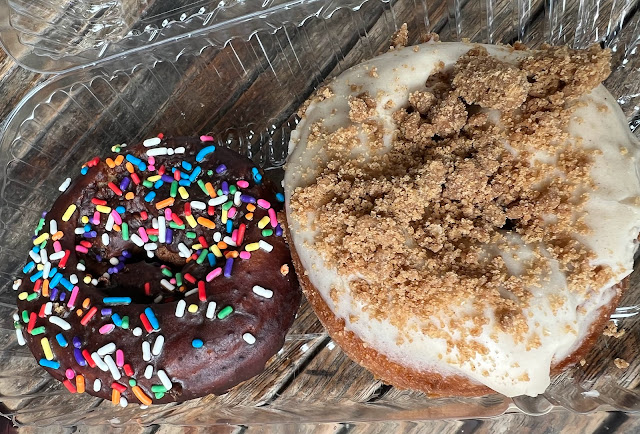