It seems that I come across so many terms that I am unaware of.  With this in mind and hoping that I am not alone in the dark, I decided to do an ongoing series on “What the Heck Is…?”  As I come across terms or things I don’t understand, I will do a post to help us develop a basic understanding.
I have heard people talk about Bitcoin for several years.  I was at a Meetup group where a man was going on and on about his Bitcoin and how much he has made with his cryptocurrency.  I could not join the conversation because I did not know what he was talking about.  So, for our first “What the Heck Is?” I thought I would tackle Bitcoin. 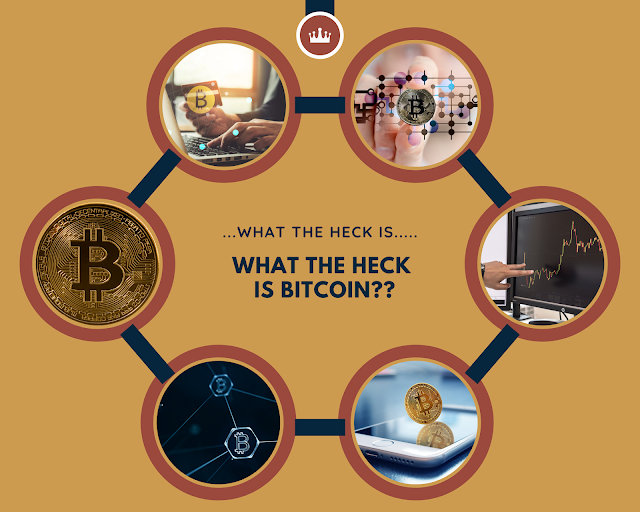 Bitcoin is a cryptocurrency which, according to Investopedia, is “a digital or virtual currency that is secured by cryptography, which makes it nearly impossible to counterfeit or double-spend.”

Why buy cryptocurrency?  I found this quote on CNBC, “Among those who do trade cryptocurrencies, the top reasons cited are that it’s easy to make trades, it’s exciting to invest in, and there’s potential for high growth in a short period of time, according to the survey.”

“Bitcoin (₿) is a decentralized digital currency, without a central bank or single administrator, that can be sent from user to user on the peer-to-peer bitcoin network without the need for intermediaries. Transactions are verified by network nodes through cryptography and recorded in a public distributed ledger called a blockchain. The cryptocurrency was invented in 2008 by an unknown person or group of people using the name Satoshi Nakamoto.  The currency began use in 2009  when its implementation was released as open-source software”. Wikipedia

“Bitcoin is the first-ever decentralized global digital currency. Among other things, this means that it is entirely computerized and doesn’t have a physical form. Bitcoin can be sent quickly and securely from any point in the world to another; the only need is an internet connection. Due to being a decentralized coin, the Bitcoin price is determined in the free market, subject to supply and demand”. Crypto Potato

Are you still lost?  Yes, so am I, but it is a bit more clear. In a nutshell, it sounds as if you buy bitcoin; it would be a cryptocurrency investment.   It sounds as if it fluctuates in value as any investment would. Am I getting it?  No.  I am just happy to have a fundamental understanding of what it is.  Now, if it is brought up in casual conversation, I won’t be lost entirely.
KathieyV